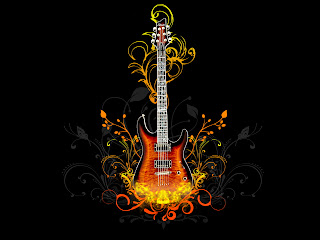 Ever since I first saw "The secret" documentary some 3 years back, the Law of Attraction concept intrigued me. I looked up and read a lot of interesting stuffs that people were doing with the concept. Many have had lots of success in attracting what they wanted. Many have had lots of failures. Also, there are lots of theories about how to apply this concept.
Well, I have had my share of trials as well. Some half-hearted trials with doubts and some real "sincere" trials ;)
Recently I experienced a success which swept me away. Let me tell about it...
Last week, after a long time, I remembered that I wanted to learn guitar. So, I thought, "I am in a place where I can actually spend time learning it. Now, I should stop giving reasons for not learning it. May be I should do something about it".
And I fixed a goal, "I want to be able to play a song with a guitar 1 month from now". For that, I first needed to buy a guitar.  What I asked the universe (i think) was this: I just want guitar coming to my hands by this Saturday. I was also thinking, It'd be cool if i just get it in my hands without actually going through the process of narrowing down a model, or even spend time buying one.
The following Saturday, I walked into my clients place, there was it, a guitar just lying there waiting for me to be seen. I asked her, "Wow, this is cool, who plays guitar here? I was thinking of getting and learning a guitar, so do you know where can i buy it and give me some tips?"
She said, lifting the guitar, "Here take this. This poor thing has been lying around and been used as a stopper for the door from getting closed. Let it be of some use in your hands".
I could not believe what was happening.
I was taken aback, pondering if i should actually accept such a gift. I was like, "No... I don't know... blah... blah... this & that" and then I stopped. For a second, I got present to my want and what was happening.
After a while, I said, "OK. Cool. May be, I'll learn a song, come and play within a month or so, May be then you'll get inspired and then you can start actually using it!!"
The coolest thing was, I wasn't particularly testing or trying out Law of Attraction. I just knew that I should have a guitar with my by Saturday, and the precise day on which i got it was what still amazes me. Also, I don't usually ask the way i did.
I think, when the context of why you want - what you want is clear, the want becomes clearly understood by the universe and it responds quickly.
Now, I ask for the next step to the universe: "Send me a tutor who can teach me to play a song in a month".
Share your comments on law of attraction, Guitar tutoring or your general opinion about Saturdays! Whatever! I am so happy!
[P. S. : The dialogues are actually paraphrased. I made it in dialogue format for the interesting appeal and also that i don't remember the exact dialogues :) ]
Posted by Unknown at 11:12 AM

This is a cute blog. Very happening.Inspiring. Actually I would want to transform this guitar story into a short film. I am certain that it would at least appeal to the list of movies, if not to Oscar nominations. On a serious note, If you want to learn Guitar from a guru (which I feel is the most recommended owing to the structured teaching techniques),I know someone in Chennai. But anyways, you took the right decision. Take the guitar along with you, in your next train and you will find another chance to unravel a mystique blog titled "Law of attraction: ______". Of course it is varanam aayiram epic guitar feeling. (Ignore the tamil movie's fiction. Make it happen. One day we both shall play a soft fusion on the coasts of marina!! Have a nice day.!!!

My reaction would be a flummoxed emoticon waiting to hear more about the feeling.!!!!
Week end..!Game!!

You writing skills are getting better n better, i think...
n here is a point to ponder:

You attract what you’re signaling."

Quite amazing!!!
Manifestation of what you attract is similar to a kid's belief - It will definitely manifest what it wants - there is no doubt about it.

One of the similar manifestation that happened last weekend when I went to Coorg with my cousins. On way back from BLR, I went to pick up clothes from my relative's house, and on the way I picked up 2 hand bags - one for my wife and one for my sister. My wife got the same hand bag that she saw while commuting in the train daily to office. Law of Attraction works, even if you don't know about it - You attract what you're signaling.

What do you mean by "signaling"?

Rise up this morning, smile with
the rising sun

Just a quick final last chance reminder to remind you to check out the video below...

==> How to Force the Universe to Manifest Your Dream Life

Also, at the end of the video you'll be given the opportunity to get a copy of the Manifestation Miracle system, which I highly recommend.

This system virtually puts the law of attraction on autopilot allowing you to use the Destiny Tuning Principle (which is explained in the video) to 'Tune' your destiny, into one of prosperity, happiness, love and more.

Watch this video and make sure you join Manifestation Miracle:

Many people don't realize there is a great big hole in the law of attraction which might be sabotaging your manifestation efforts.

Many people around the world are living their dream lives and you can be one of them, once you discover this missing ingredient.

Follow this link to discover the missing ingredient and manifest abundance, wealth, health, love and more...

I only ask that you use this secret with good intentions and an abundant mindset.

P.S. This secret will literally force the universe to give you all the tools that you need to create financial, emotional and spiritual abundance...

...Without hard work or struggle.

Many impactful personalities like Newton, Edison, Shakespeare, Da Vinci, etc they all knew about “THE LAW OF ATTRACTION” and they also used it, with the help of it they had achieved so much in their lives.
Thanks, for the wonderful post.
Related: Click here to visit