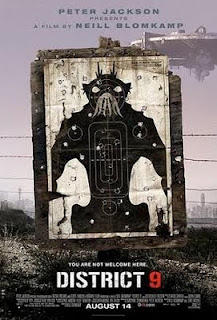 District 9 has aliens in it, but it definitely is a movie about us, humans and what we are evolving into.
Plot

It is set in a near future where millions of alien species have have been colonized in District 9, in Johannesburg, where their spaceship is stranded. It has been 20 years since their arrival and the concept of alien existence has been accepted in the society to a level where legal and civic rights are in place for the aliens for a supposedly peaceful co-existence with humans. Due to pressure, the government with the help of Multinational United (MNU), a private military corporation, is set to relocate the millions of aliens to a more secure location, 240 KM outside the city, called District 10.
The movie unravels as Wikus van de Merwe (played by Sharlto Copley), a MNU field operative, leading the relocation and serving of eviction notices to the aliens. The first few scenes, interspersed with interviews of experts from various fields, runs documentary-like in an attempt to help the viewers catch up with situations and reasons behind them.
What starts out as a slow paced documentary gradually picks up pace. With the DNA activated alien weaponry and special effects, the second half is a nail-biting thriller with action packed chase sequences giving the viewers a direction as to where the movie is headed.
The Message

This movie is more about the message than the scientific / philosophic inquires as focused in other alien movies like contact. Neither does it bother with gadgetry display of big machines fighting.
Also, questions like how the aliens ended up here on earth?, how much different are they from us humans? or what planet are they from? are conveniently and blatantly avoided. Only information we get about the aliens' past is a huge alien space ship hovering over the Johannesburg city, suggesting the aliens are technologically more advanced.
The movie invites the viewers to witness a question that has never been asked before in other alien movies. A question that is asked from totally opposite perspective. How kind can humans be, if they really had all the powers? And, the answer is of course, quite daunting.
And, even better is the whole movie does not cater to the mainstream media's needs, especially the end stands out on this. (Although, I personally felt certain clichés like the appearance of the alien species, with gross exoskeleton and human-like figure could have been different). Since the aliens are not necessarily portrayed as villains, the end gets quite unpredictable and justified.
Bottom Line

District 9 made me wonder, Is technology without compassion, an efficient way for human evolution?

Read another review of the movie at Reelviews by James Berardinelli

Other Science Fiction Movie recommendations:
The Man from Earth
Contact
Cloverfield
V for Vendetta
Gattaca
All of them have completely different and deep view point to offer which has been presented exquisitely. I hope to be writing a review on them.
Posted by Unknown at 7:24 PM 4 comments: